A survey by the Pew Research Center shows that American parents differ substantially by political affiliation when it comes to what their K-12 children should learn in school.

The survey, conducted throughout October of 2022, showed that Republican parents are about twice as likely as their Democratic counterparts to state that they don’t have enough influence when it comes to teaching subjects. Republican parents are also more likely to state that school boards have too much influence (30%) compared to Democrats (17%). 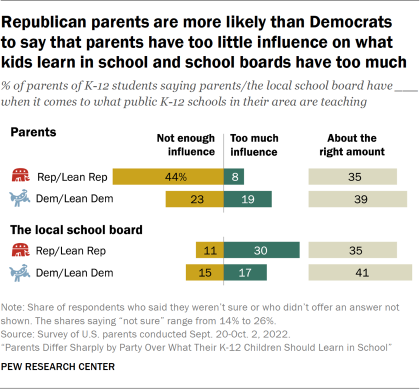 “On both gender identity and the legacy of slavery, there are differences ranging from 23 to 46 percentage points in what Republican and Democratic parents of K-12 students would prefer that their children learn in school,” the report states.

“There are also large partisan differences when it comes to what parents want their K-12 children to learn about sex education and America’s standing in the world.”