According to a survey published by the Pew Research Center, most K-12 parents in American believe the first year of the COVID-19 pandemic resulted in a negative effect on their children’s education.

In the survey, more than four-in-ten, or 44 percent, of respondents believe this is still the case today. 56 percent believed that the negative effect was temporary. 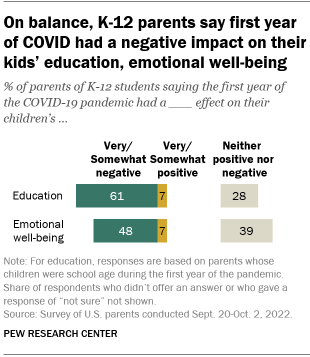 The survey also found that among the respondents, White and upper income parents were more likely to see the pandemic as a substantial impact on their children’s education and emotional well-being.


“The patterns are similar when it comes to the impact of the pandemic on children’s emotional well-being,” according to the Pew study.

“White parents (53%) are more likely than Black (39%), Hispanic (41%) and Asian parents (40%) to say the first year of the pandemic had a negative effect on their children’s emotional well-being. And a higher share of upper-income parents (57%) than middle- or lower-income parents say the same (49% and 43%, respectively).”

“When it comes to the emotional impact of the pandemic, most parents who say there was a negative effect in the first year say things are better now (74%). But these attitudes differ by race and ethnicity.” 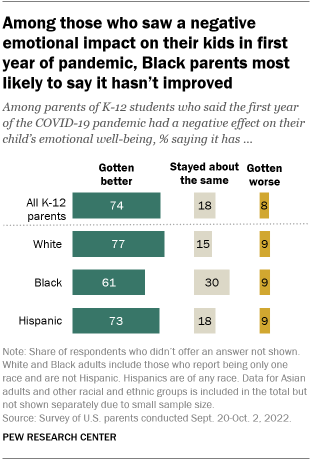 The Pew report can be read by clicking here.