Despite the fact that print books continue to be more popular than e-books or audiobooks, there are a substantial number of American adults that prefer to read electronic formatted books, according to a survey by the Pew Research Center.

“Americans are spreading their book consumption across several formats,” the authors of a Pew report stated. “The share of adults who have read print books in the past 12 months still outpaces the share using other forms, but 30% now say they have read an e-book in that time frame.”

The Pew report found that 65 percent of American adults surveyed preferred reading a print book in the past year. The survey was conducted during January and February of 2021. 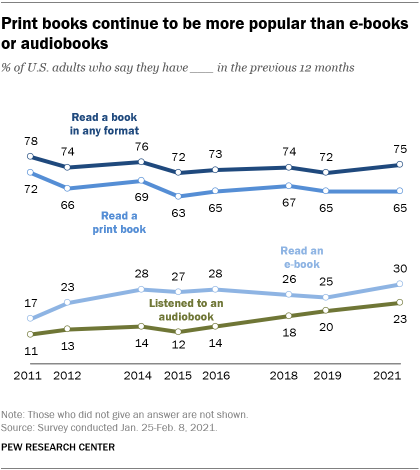 The survey also determined that 3 in 10 Americans, or 30 percent, preferred e-books than print books. About one-third of Americans say they read both print and e-books in the preceding year.

“Despite growth in certain digital formats, it remains the case that relatively few Americans only consume digital books (which include audiobooks and e-books) to the exclusion of print,” the report reads.