The Pew Research Center, a nonpartisan think tank, has published a new report indicating that many believe social media is good for democracy, with its share of negative and positive effects on society.

The survey took place in the Spring of 2022. The U.S. was seen as a major outlier upon examining the data.

The data showed that more Americans believe the internet and social media have a negative impact on society than other countries involved in the survey. 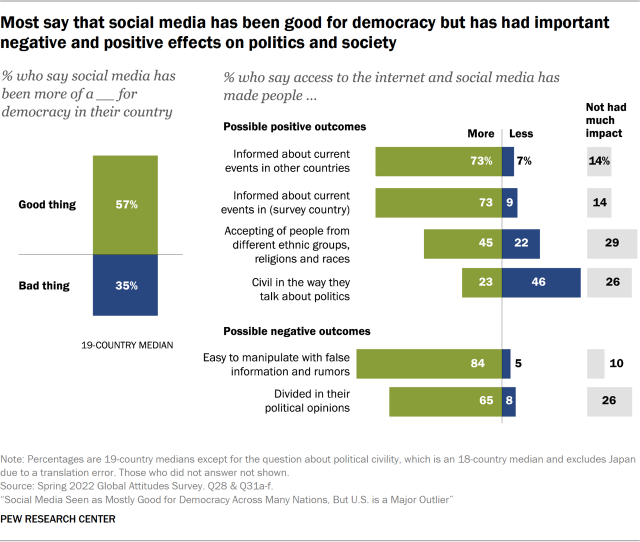 Americans were more likely to believe that the internet and social media is associated with more division attributed to political orientations.

“There are substantial cross-national differences on this question, however, and the United States is a clear outlier: Just 34% of U.S. adults think social media has been good for democracy, while 64% say it has had a bad impact,” according to the Pew report. “In fact, the U.S. is an outlier on a number of measures, with larger shares of Americans seeing social media as divisive.”

Although other countries saw social media as a positive part of the democratic process, Americans believed otherwise.

“Majorities in most of the nations surveyed believe social media has been a good thing for democracy in their country. Assessments are especially positive in Singapore, Malaysia, Poland, Sweden, Hungary and Israel, where 65% or more hold this view (for data on how international research organizations assess the quality of democracy in the countries surveyed.”

“In contrast, Americans are the most negative about the impact of social media on democracy: 64% say it has been bad. Republicans and independents who lean toward the Republican Party (74%) are much more likely than Democrats and Democratic leaners (57%) to see the ill effects of social media on the political system.”