The European Union was viewed favorably by more than a dozen countries within the bloc and abroad, according to a survey by the Pew Research Center.

The survey consisted of assessing adult respondents from 19 countries.

Positive views of the EU increased significantly from 2021 in many nations, including Germany, France, Sweden, Belgium, and Poland. 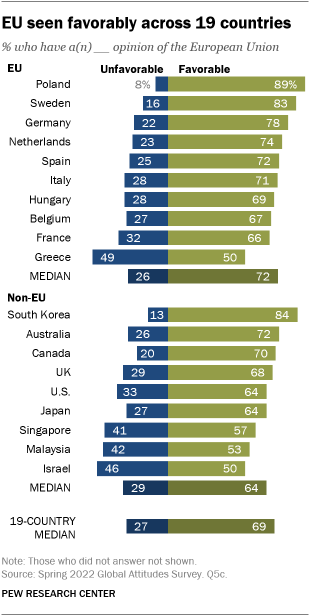 The survey also found that respondents who identified as leftists were more likely to hold favorable views of the EU.

“Both inside and outside of the bloc, views of the EU are associated with people’s ideological leanings,” the Pew authors wrote in their report. “Those who place themselves on the ideological left often express a more favorable opinion of the EU than their counterparts on the right.”

Two out of five adults who consume cigarettes smoke menthol: study
Next Article