American adults under 30 now are almost as likely to trust information on social media similar to information from national news outlets, according to a survey by the Pew Research Center. 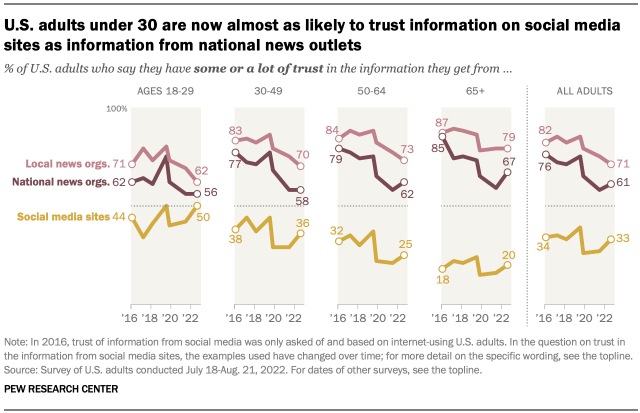 “The share of adults under 30 who express at least some trust in information from social media is at its highest level (tied with summer 2019), while the share with trust in national news is at its lowest level (tied with last year),” the Pew authors wrote in their report. “Indeed, the 6 percentage point gap between the share of young adults who trust social media sites and the share who trust national news outlets is the smallest for any age group since the Center first asked this question in 2016.”

“Local news outlets are the most trusted among all age groups, but trust in these outlets among Americans overall is at its lowest point in recent years,” the report also states. “While a large majority of Americans (71%) have some or a lot of trust in the information they get from local news outlets, this is down from a high of 85% in both 2019 and 2017. This decline has occurred across many demographic groups and in both political parties.”