When it comes to the nation’s immigration policy, the objectives of Republicans and Democrats differ dramatically.

A new Pew Research Center survey has found that Republicans are more in tune with securing the U.S. side of the border and deporting migrants who breached their nation’s federal laws by trespassing illegally. Democrats, on the other hand, place their focus on providing a safe haven for lawbreakers.

The survey, conducted during August 2022, involved asking more than 7,600 U.S. adult respondents about their opinion on immigration policy.

Most Americans believe increased border security is a goal of U.S. immigration policy worth considering. The majority also believes that only children who cross the border illegally should be allowed to remain in the U.S. 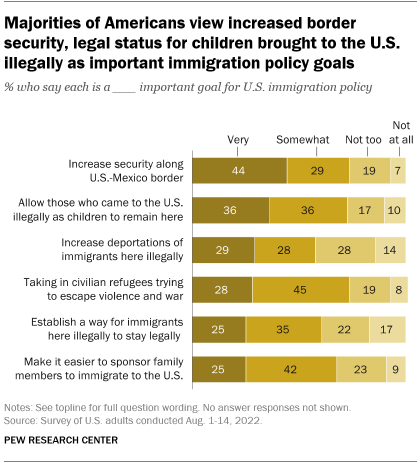 “As the number of people apprehended for illegally crossing the southern border has reached record annual levels, about three-quarters of Americans (73%) say increasing security along the U.S.-Mexico border to reduce illegal crossings should be a very (44%) or somewhat (29%) important goal of U.S. immigration policy,” the report states.

“Nearly all Republicans and Republican-leaning independents (91%) say border security should be an important goal, while a smaller majority of Democrats and Democratic leaners (59%) say the same, according to the survey of 7,647 U.S. adults conducted Aug. 1 to 14.”

The findings of the Pew report can be read by clicking here.