A recent survey conducted by an American think tank revealed that the majority of Americans continue to support the abolition of the Electoral College, which is used to directly determine the candidates for political office in each election cycle.

Citizens have always played an indirect role in the election of their presidential candidates to federal office by voting for representatives at the state level who are responsible for directly electing the president.

Approximately six-in-ten U.S. adults, or 63 percent of respondents, believe that the president should be elected by popular vote instead of the Electoral College system, according to an online survey conducted by the Pew Research Center.

The survey was administered from June 27 to July 4, 2022. More than 6,000 individual people provided responses to online questions. 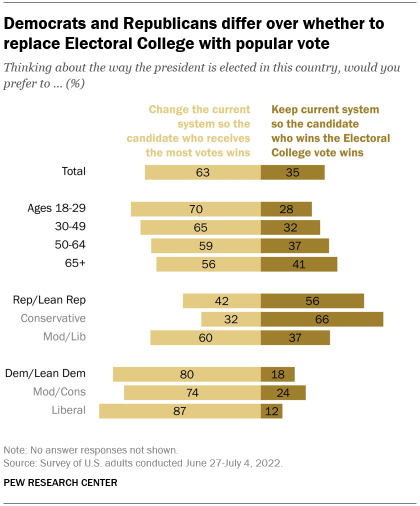 “As in past years, Democrats and Democratic-leaning independents are far more likely than Republicans and Republican leaners to support moving to a popular vote system (80% vs. 42%),” the authors of the survey determined.

“The share of Democrats saying this is up 9 percentage points from January 2021, but about on par with views in 2020.”

The findings of the survey can be read by clicking here.