Since the terrorist attacks that led to the passing of the Patriot Act in 2001, the Muslim population has grown significantly, with discrimination still a rampant issue in America.

According to new data by the Pew Research Center, the Muslim population is steadily growing in America, with nearly 3.85 million Muslim adults and children based on a 2020 estimate, an increase from 2.35 million in 2007.

The survey, conducted between March 1st and 7th, 2021, also unveiled that Americans are more likely to believe that Muslims face discrimination compared to people of other religious beliefs.

“In a March 2021 survey, U.S. adults were asked how much discrimination they think a number of religious groups face in society,” the Pew authors wrote in their report. 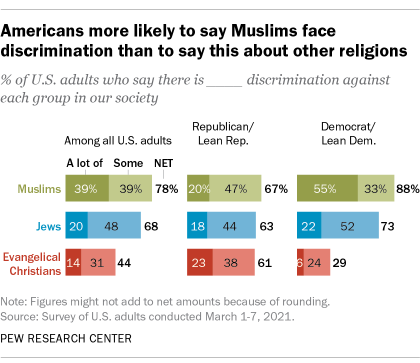 It is widely believed that negative attitudes toward Muslim people may be because Americans know very little about Islam or Muslims.

“The U.S. Muslim population has grown in the two decades since, but it is still the case that many Americans know little about Islam or Muslims, and views toward Muslims have become increasingly polarized along political lines,” the Pew authors inferred.