Many expressed praise and high confidence in Angela Merkel throughout her 16-year tenure: survey Throughout her 16-year tenure as the German Chancellor, Angela Merkel was met with a consistently favorable reception, based on a new survey.

According to new data released by the Pew Research Center, a vast majority of survey respondents expressed high confidence in the German leader. In fact, the survey found that respondents felt more confidence in Merkel than other world leaders, including France’s Emmanuel Macron, China’s Xi Yinping, U.S.’s Joe Biden, and Russia’s Vladimir Putin.

“Merkel currently enjoys the highest confidence ratings of the five world leaders asked about in the survey,” the authors of the Pew survey stated. 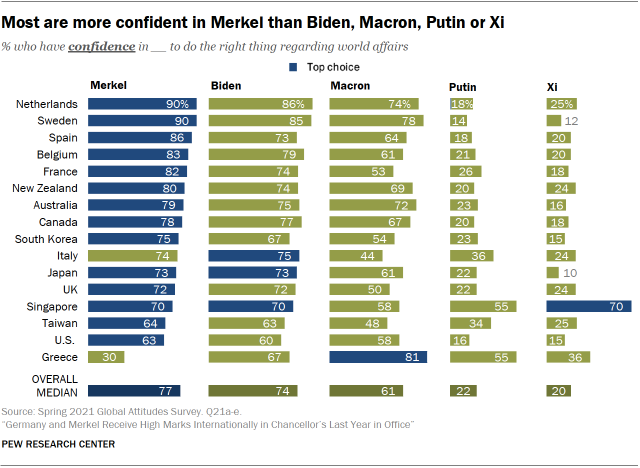 Moreover, in Greece, support for Germany and its leader Merkel remains low, with only 30 percent of respondents expressing confidence in the German leader. And only 10 percent believed Germany has the right amount of influence in the European Union.

“These are among the major findings from a Pew Research Center survey conducted among 17,823 respondents in 16 advanced economies – not including Germany – from Feb. 1 to May 26, 2021,” the Pew report reads.

The Pew report was released amid Merkel’s final moments in federal office, as perhaps history’s most adept female world leader is expected to step down in favor of a new Chancellor in the upcoming general election.