As Americans have returned to international travel after restrictions caused by the coronavirus pandemic, the number of travelers is steadily on the increase again.

According to a survey by the Pew Research Center, however, during the start of the coronavirus pandemic in 2020, fewer than one million Americans traveled internationally, fearing contagion.

During the month of February, March, and April of 2020, the number of U.S. citizens traveling internationally tanked astronomically, before gradually increasing again back to normality by mid-2020.

“In March 2021 – the most recent month for which data is available – around 3 million American citizens traveled outside of the country. This is shy of the nearly 4 million U.S. citizens who traveled abroad in March 2020 as the coronavirus pandemic unfolded and far below the roughly 8 million who did so in March 2019, according to U.S. Department of Commerce data,” the Pew report shows. 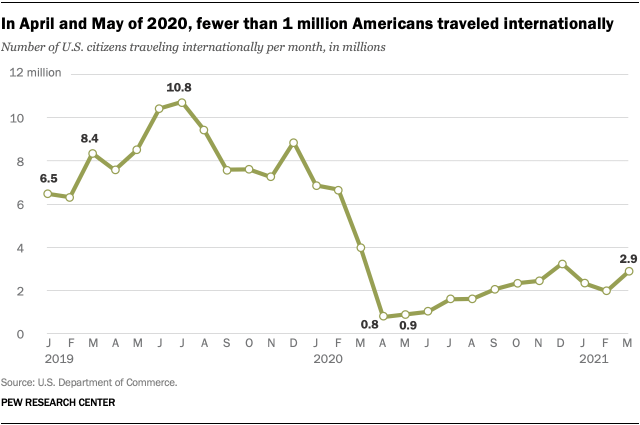 “But it represents a significant uptick over the low point in the late spring of 2020, when only around 1 million Americans or fewer left the United States. Still, international travel by Americans remains far below pre-pandemic levels.”

The Pew survey also found that most Americans have been out of the country at least once during the pandemic, based on data of U.S. adult respondents conducted during mid-June of 2021.

“Whether before or during the pandemic, international travel is something a 71% majority of U.S. adults have done at some point in their lives. By contrast, around a quarter (27%) have not traveled abroad,” the Pew survey also concluded.