More women in America are taking part in services at U.S. mosques According to a new survey by the Pew Research Center, more women are now participating in religious services at U.S. mosques than before.

The survey showed that, despite men accounting for the majority of guests at religious services at U.S. mosques, more women are attending, with an increased rate of holding leadership roles at American mosques.

At U.S. mosques, the Pew authors found that more women are securing roles on board of trustees (an increase in 2011 from 77 percent to 88 percent in 2020) and women’s groups (an increase from 29 percent to 55 percent). 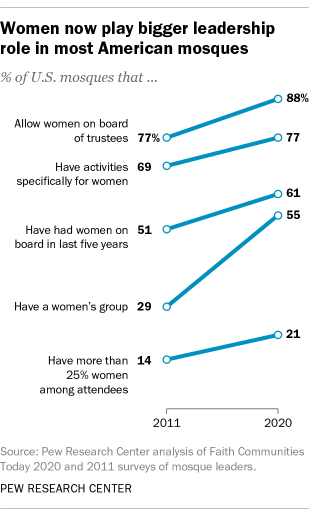 “Though women make up a relatively small share of the attendees at Friday prayer services, the new FACT study found that most U.S. mosques (55%) have a dedicated women’s group, and roughly three-quarters (77%) have activities or programs specifically for women,” the Pew survey showed.

“On both of these measures, mosques’ efforts have grown since 2011. At that point, only 29% of mosques had a women’s group, and seven-in-ten (69%) had activities or programs specifically for women.”

“Women also have been gaining more representation on mosque boards. About nine-in-ten U.S. mosques (88%) allow women on their board of trustees (or a similar administrative body), and 61% say that women have served on the board at some point in the last five years,” the Pew data also concluded.