Compared to 2018, more Americans are now open to the idea of more restrictions for combatting online misinformation, according to a survey by the Pew Research Center.

“Roughly half of U.S. adults (48%) now say the government should take steps to restrict false information, even if it means losing some freedom to access and publish content,” a new Pew report explained.

“That is up from 39% in 2018. At the same time, the share of adults who say freedom of information should be protected – even if it means some misinformation is published online – has decreased from 58% to 50%.” 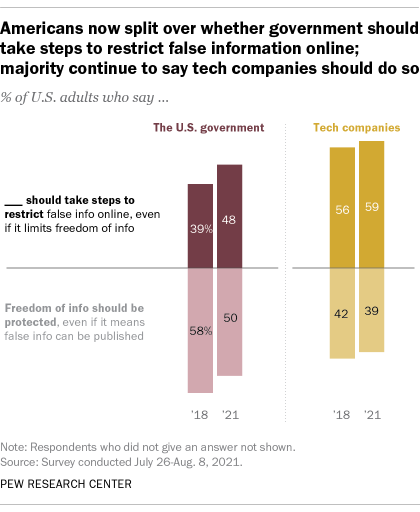 The Pew survey involved more than 11,000 adult participants who were recruited between July 26th and August 8th, 2021.

In the Pew report, it was concluded that partisan divisions differ drastically, with Democratic or left-leaning respondents having been more likely to agree with doing more to restrict misinformation online compared to their counterparts.

“Partisan divisions on the role of government in addressing online misinformation have emerged since 2018,” the Pew survey emphasized.

“Three years ago, around six-in-ten in each partisan coalition – 60% of Republicans and GOP-leaning independents and 57% of Democrats and Democratic leaners – agreed that freedom of information should be prioritized over the government taking steps to restrict false information online.”

Study suggests some mental abilities may actually improve with aging