In 2021, a majority of Americans believed in the possibility of a form of intelligent life existing outside of the Blue Marble, despite no official association between astrobiological life and unidentified aerial phenomena.

In a Pew Research Center survey, as many as two-thirds of Americans, or 65%, believe in the possibility of intelligent life, perhaps somewhere not too distant from the Earth or in an extrasolar setting.

Interestingly, the survey also found that respondents believe unidentified aerial phenomena do not pose a threat to U.S. national security, despite the disclosure of ongoing militaristic investigations predating the creation of the U.S. Department of Defense, the U.S. Air Force, and all of the modern premier domestic and foreign intelligence agencies in America, including the Bureau, one of the primary bodies responsible for such high-scale military investigations.

According to the survey, 40 percent of adult respondents say that unidentified aerial phenomena witnessed by military personnel probably may be evidence of intelligent life outside of the Earth. 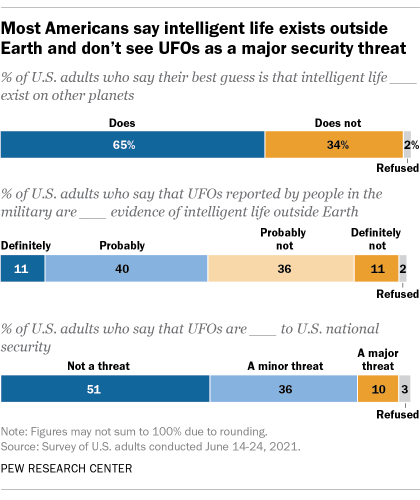 The Pew data also showed that younger Americans were more likely to sway with the idea that some form of intelligent life may exist on other planets, with males, younger adults, and higher educated respondents responsible for the majority of this consensus.

“Men are more likely than women to believe in extraterrestrial life (70% vs. 60%),” the Pew authors found.

The survey was conducted in June of 2021, amid the release of a U.S. intelligence report released by the Office of the Director of National Intelligence. The report reaffirms interest in unidentified aerial phenomena and countless ongoing investigations implicating all six forces of the U.S. Armed Forces in the air, land, and the sea.

Study localizes the brain circuit responsible for spirituality and religiosity