Following the removal of the United Kingdom from the European Union, many advanced economies now view the EU favorably, with some mixed reactions when it comes to the recent COVID-19 pandemic, a new survey finds.

According to the Pew Research Center, nations such as Sweden, Spain, the Netherlands, and Italy, view the EU favorably the most, with those same countries also viewing the EU’s coronavirus response in a favorable manner.

The survey was conducted in the Spring of 2021. 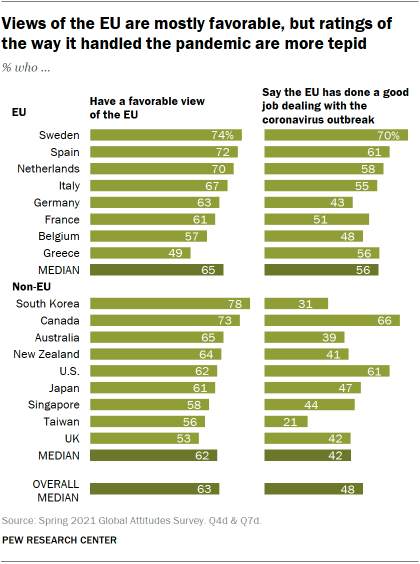 “A median of 63% across the 17 publics surveyed rate the EU positively. Among the eight member states surveyed, opinions are most favorable in Sweden, Spain and the Netherlands, where at least 70% have a positive view of the EU,” the Pew findings showed.

“Although majorities in Germany, France and Belgium have a positive assessment of the EU overall, only about half or fewer think it has handled the outbreak well. Greeks are the least likely among those surveyed to view the EU favorably overall, though a majority of Greeks say the EU did well in its response to the pandemic.” Women are more depressed in societies not advocating for gender equality