The release of a survey by the Pew Research Center unveiled that an estimated six-in-ten Americans believe abortion should become legal in all or most cases.

The survey was conducted in early to mid-April 2021.

Among the American adult respondents surveyed, left-leaning voters, or Democrats, was the most prevalent political group associated with support of legalizing abortion. 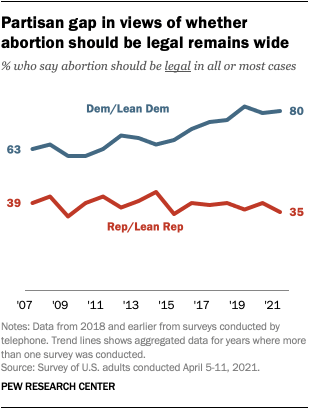 “In the latest survey, Democrats and Democratic-leaning independents are 45 percentage points more likely than Republicans and Republican leaners to say abortion should be legal in all or most cases (80% vs. 35%),” the Pew data showed.

“This gap is little changed over the last few years, but the current divide is wider than it was in the past. For instance, as recently as 2016, there was a 33-point gap between the shares of Democrats (72%) and Republicans (39%) who supported legal abortion in all or most cases.”

Moreover, the respondents who were distant from any religious affiliation were strongly supportive of legalizing abortion in America.

“Religious “nones” – those who are religiously unaffiliated – overwhelmingly support legal abortion. Around eight-in-ten (82%) say it should be legal in all or most cases, while just 16% say it should be illegal,” the Pew data also determined.