A majority of Americans are in accordance with local and federal law enforcement entities for the prosecution of all the Jan. 6 rioters at the U.S. Capitol, according to a report by the Pew Research Center.

In the Pew report, as many as 69 percent of American respondents said that the prosecution of the Capitol rioters is very important, while only 18 percent of respondents disagreed.

Among the same participants, 22 percent advocated for heightening criminal penalities, while 47 percent believed less severe penalities should be imposed.

The study was conducted on the first week of March 2021 and included over 12,000 adult participants residing in the United States. 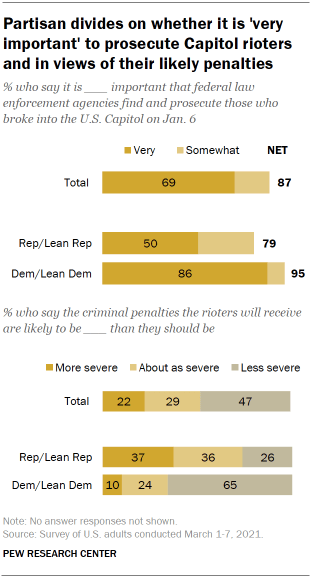 “Republicans and Democrats differ sharply over how important it is for law enforcement to prosecute those involved in the Jan. 6 riots and whether criminal penalties will be less severe than deserved. Partisans are less divided over whether federal law enforcement agencies are up to the task of finding and prosecuting participants who scattered across the country after the events that day.”

In the report, a majority of both Democratic and Republican respondents agreed to the implementation of criminal penalties among the Capitol rioters. Democratic respondents were particularly more in tune with this.

“Democrats are more intense in their views: Fully 86% of Democrats and independents who lean toward the Democratic Party say finding and prosecuting rioters is very important, compared with half of Republicans and Republican leaders,” the report also states.

Study of neural circuits examine the interplay of excitation and inhibition