Since its origination in the late-1700s by former American diplomat and founding father James Madison, the Electoral College within the United States has decided the presidency several times, scuffing away the power of the popular vote.

In 2020, the general election yielded a Democratic 46th sitting president, with the current leader having secured the majority for both the popular vote and the Electoral College.

But despite a fair victory for the presidency, a significant amount of Americans are not too keen on relying on the Electoral College to decide the presidency, as had occurred in 2000, 2016, and a few times in the 19th century.

In fact, according to a recent survey, many Americans would prefer to dismantle the Electoral College in favor of the popular vote to elect future sitting presidents.

In the survey, conducted by the Pew Research Center, a majority of Americans, particularly those in early adulthood, with higher educational attainment, and who lean more toward liberalism, favor a change in the current system of general elections.

“A modest majority of Americans continue to favor changing the way presidents are elected, as they did in a January 2020 survey: 55% in the new poll say the system should be changed so that the winner of the popular vote nationwide wins the presidency, while 43% favor keeping the Electoral College system,” the Pew data shows.

“Attitudes about the Electoral College remain deeply divided along partisan lines. Overall, other demographic divides are relatively modest. Younger adults are somewhat more supportive of changing the system than older adults (60% of those ages 18 to 29 support changing the system, compared with 51% of those 65 or older),” the report also states. 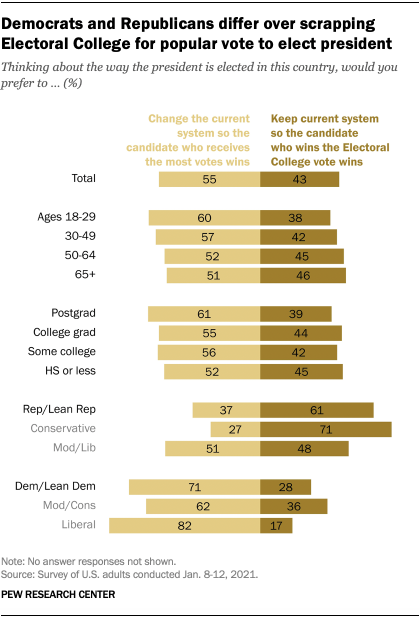