The Islamic Republic of Iran, less commonly referred to as Persia, has taken center stage in recent years over concerns of its purported nuclear ambitions.

Cooperation with Venezuelan leadership and the reported killing of both an Iranian General and prominent nuclear scientist has led to an unprecedented escalation of tensions.

Although both the U.S. and Iran have been perceived critically on the world stage for their role in countless military conflicts and alleged war crimes in the Middle East, Iran’s purported stockpile of nuclear arsenal remains a more urgent concern for officials with the United Nations.

As the U.S. begins its transition into deep divergency with a new administration set to occupy the oval office, tensions could boil over again as many Western and Eastern leaderships are fed up with the nation of Iran.

According to a recent poll by the non-partisan think tank Pew Research Center, a striking number of developed nations on both hemispheres despise Iranian leadership. 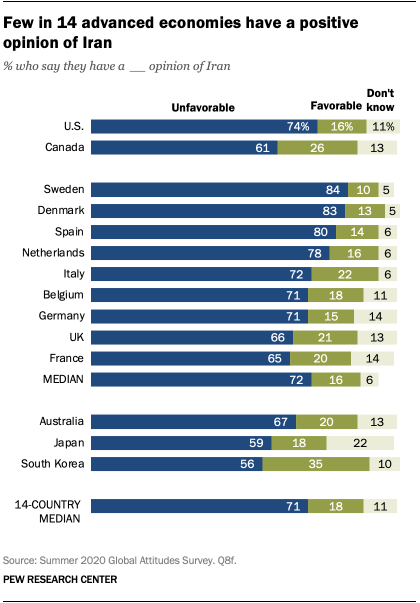 Among the nations surveyed who shared distasteful views of Iran include several European countries, such as Sweden, Denmark, Spain, the Netherlands, Italy, Germany, France, and the United Kingdom; in addition to the United States.

“Iran is viewed negatively by people in many countries around the world,” the Pew Research Center report reads. “In a survey of 14 advanced economies from this summer, a median of about seven-in-ten expressed unfavorable views of Iran. In all 14 countries surveyed, majorities had negative impressions of Iran.”

The two nations that expressed the least distaste toward Iranian leadership included East Asian nations like Japan and South Korea, where even then, the majority of respondents still refrained from any praise.

“On the flip side, adults in the two East Asian countries included in the survey were the least likely to express dislike of Iran. About six-in-ten or fewer in Japan and South Korea hold Iran in low regard, shares about 10 points or more below the median,” the survey determined.

Furthermore, both major political ideologies in America have been nearly consistent in agreement with the dismemberment of Iran’s nuclear ambitions, as do folks of much older age ranges.

“In 11 of the nations polled, older people were more likely than younger people to give Iran poor marks. And in 10 of those countries, there are double-digit divides in views of Iran between older and younger adults,” the report concluded. 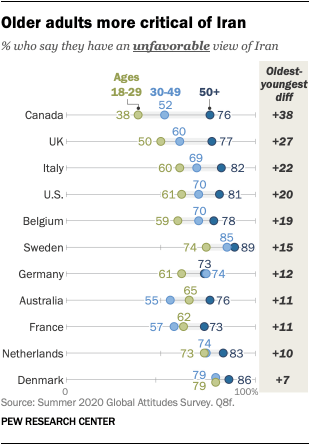