Many Americans say news sources are not publishing accurate or complete information in their reporting of government or politics, a new survey claims.

The survey involved more than 10,000 American respondents, including close to 9,000 registered voters. A substantial number of those respondents, or 37 percent, stated they came across misinformation or news by established sources aimed at misleading their audiences.

Overall, the findings allege a concern for the use of misinformation among American journalists.

“The findings come against a backdrop of broader concern about misinformation in the United States,” the Pew Research findings claim.

“In the same survey, 59% of Americans say made-up information that is intended to mislead causes a “great deal” of confusion about the 2020 presidential election. Many say the same about breaking news that is not fully verified (47%) or factual information presented to favor one side of an issue (42%).” 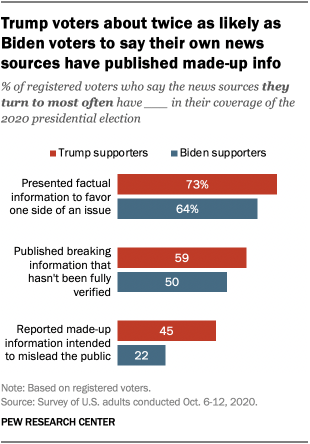 The Pew Research Center models itself as a nonpartisan think tank devoted to public opinion polling, demographic analysis, and social science research. It is based in the nation’s capital.