There were fewer apprehensions at the US-Mexico border in 2020, a sharp decline from last year which likely resulted from the COVID-19 pandemic, new research indicates.

The data, originating from the U.S. Customs and Border Protection, unveiled a substantial decrease in apprehensions, a drop by as much as 53 percent from 2019.

“The decrease in apprehensions comes as the movement of migrants in the Americas and worldwide has slowed during the COVID-19 outbreak, with governments fully or partially closing their borders to stem its spread,” the Pew Research Center commented in their report of the data. 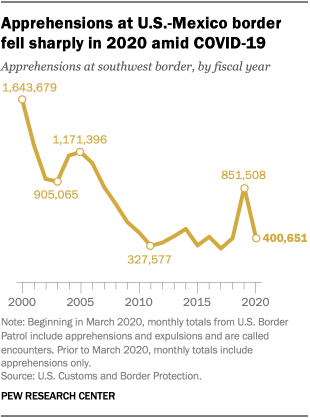 The data also demonstrated how Mexicans were greatly responsible for the majority of apprehensions in 2020, in comparison to non-Mexicans from other Central American nations.

Single adults were also the majority in cases of apprehensions at the border.

“There were 317,864 apprehensions of single adults, representing 79% of the total and the largest number of single adults apprehended in six years,” according to the Pew Research Center. “Apprehensions of “family units” – defined as the number of individuals traveling in a family – made up 13% of the total, falling from 473,682 in fiscal 2019 to 52,230 this past year.”

The data from the Department of Homeland Security can be viewed by clicking here.

Healthcare providers should be asking patients often about cannabis consumption