As America preps for its transition into a new presidential administration, the current sitting leader of one of the world’s most powerful lands will leave federal office having plummeted its administration’s reputation on the world stage, recent surveys suggest.

According to the non-partisan think tank Pew Research Center, the 45th President of the United States experienced a relatively steady decrease in internationally favorable ratings throughout the entire presidency. As too has the ratings for the nation, as a whole, gone down — having reached a record low in the final 12 months of the four-year term.

“Trump’s unpopularity has had a significant negative effect on America’s overall image,” the Pew Research report states. “Ratings for the United States plummeted after he took office in 2017, and they have declined further over the past year, at least in part due to the widespread perception that the U.S. has handled the coronavirus pandemic poorly.”

The report also states, “In fact, in several nations that are key U.S. allies and partners, the share of the public with a favorable view of the U.S. is at its lowest point in nearly two decades of polling.”

Despite the immense backing and support by right-leaning voters at the initial stages of the first term, the current sitting president was perceived by many foreigners in an obscure way, particularly by the fact of no prior military or government service.

Among foreigners, data compiled by the think tank shows that the 45th sitting president is viewed upon as arrogant, intolerant, dangerous, but still a solid leader, given those prior characteristics. A lower number of foreigners perceive the leader as charismatic, well-qualified for the role, and empathetic of the general population, however.

In some nations considered to be allies of the U.S., on both hemispheres, the majority have also expressed unfavorable reception toward the American leader and his major policies as well, the report claims. 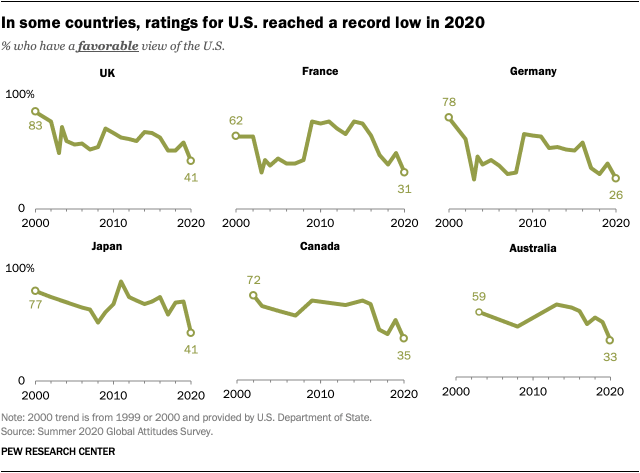 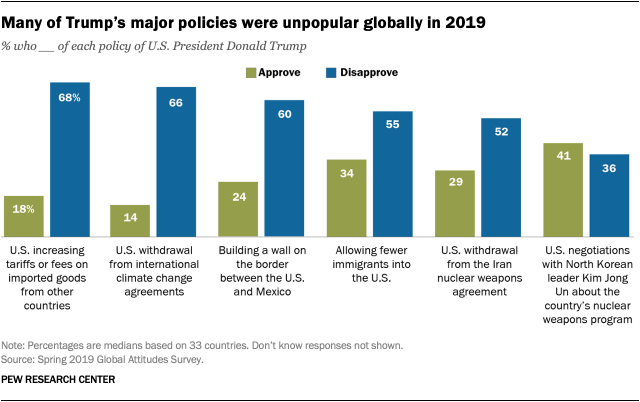 Collectively, the surveys derived from years of data indicate that the upcoming 46th President of the United States may be inheriting quite a ruckus as the nation moves onto the next chapter of American history.