In the U.S., there is more racial and ethnic diversity now compared to any other time in the nation’s history. And it is estimated that the country’s population of non-Hispanic White Americans will increase to over 50 percent of the total population by 2044, recent data shows.

According to Pew Research Center, their new survey found that most Americans neither dislike nor show high praise for the next 25 to 30 years, in which Black Americans, Latinos, and Asian Americans are expected to make up the majority of the country’s population.

The study was conducted on more than 11,000 adult participants and the survey question did not involve all racial and ethnic groups. 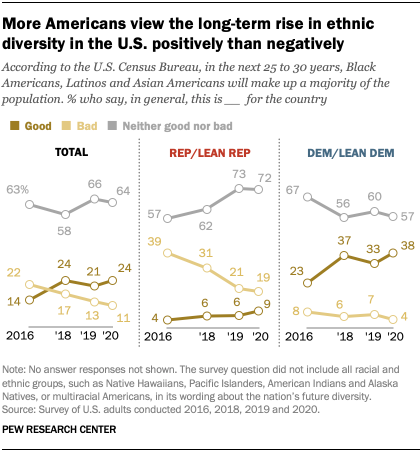 “Nearly a quarter (24%) say this is a good thing, while fewer than half as many (11%) say it is bad,” a Pew Research news release states.

“While these views have changed little since 2018, the public expresses more positive – and less negative – views of the long-term rise in racial and ethnic diversity than it did four years ago, during the last presidential campaign.”

“Since then, the share saying a majority Black, Hispanic and Asian population is a good thing has increased by 10 percentage points, while there has been a comparable decline (11 points) in the share saying it is bad thing,” the news release also states.

In comparison to 2016, a larger number of Americans across all demographic groups shared positive views at the prediction that Black, Latino, and Asian Americans were to make up a majority of the nation’s population in a few decades.

The positive regard toward the change in diversity among the majority of the population was more prevalent in Gen Z and Millennial respondents compared to Gen X and Boomers. 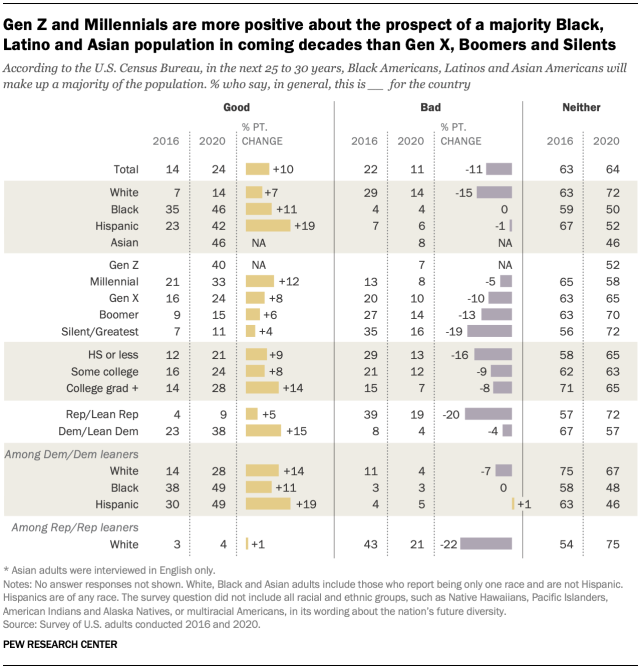 “These differences across racial and ethnic groups persist among Democrats and Democratic leaners – White Democrats are less likely (28%) than Hispanic (49%) and Black Democrats (49%) to say that the prospect of a majority non-White nation is good for the country.”