In the U.S., as the total of confirmed COVID-19 cases interlaces well into the millions, the motive as to the increase in numbers vary by political ideology.

According to Pew Research Center, a majority of Republicans are more likely to side with the belief that increases in confirmed cases are the result of more testing, their new survey found. Democrats, however, point to more infections.

“Six-in-ten Americans say the number of confirmed coronavirus cases in the U.S. is rising primarily because there are more new infections in the country, not just because more people are being tested compared with previous months,” said John Gramlich, author of the survey, in a news release. 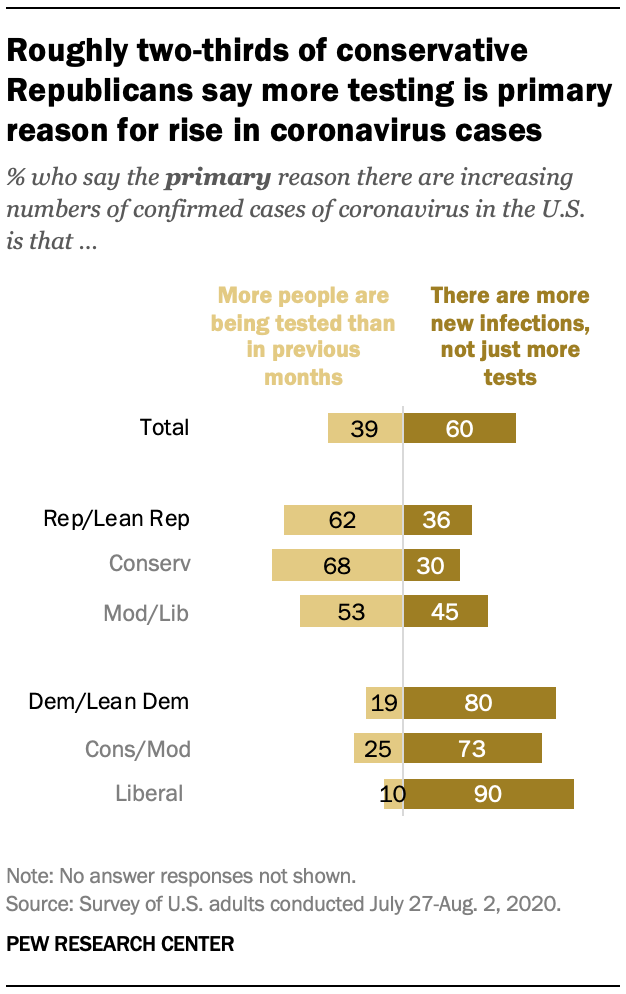 “Around four-in-ten (39%) say the increase is primarily the result of more people being tested, according to the survey, which was conducted July 27-Aug. 2 among 11,001 U.S. adults.”

The American public’s perception of increases in confirmed coronavirus cases can also vary by educational attainment. For instance, in the survey, college graduates were more likely to be in accordance with the belief that rises in cases are the result of more infections.

“Around seven-in-ten adults with a bachelor’s degree or more education (71%) say the recent increase in confirmed cases is primarily the result of more infections, not just more testing,” the survey determined.

“A little over half of those with some college or less education (54%) say the same. In both partisan coalitions, those with at least a bachelor’s degree are more likely than those without to attribute the rise in confirmed cases primarily to more infections.”