The consensus of many Americans has shifted toward the advocation of gender equality, even among those who do not identify as a feminist, according to a recent survey.

Initiated by Pew Research Center between mid-March and early-April of 2020, their research team found that most respondents supported the proposed addition of the Equal Rights Amendment to the U.S. Constitution, granting equal legal rights to all American citizens, regardless of gender.

Since the ERA’s Congressional passing and approval for ratification, its ideals propagated by the feminist movement has led to acceptance among a significant portion of society. It may be imperative in the near future for the abolishment of feminism as more women hold capacities as heads of state or government and lead at the top of corporate ladders on the board of directors and as chief executive officers. 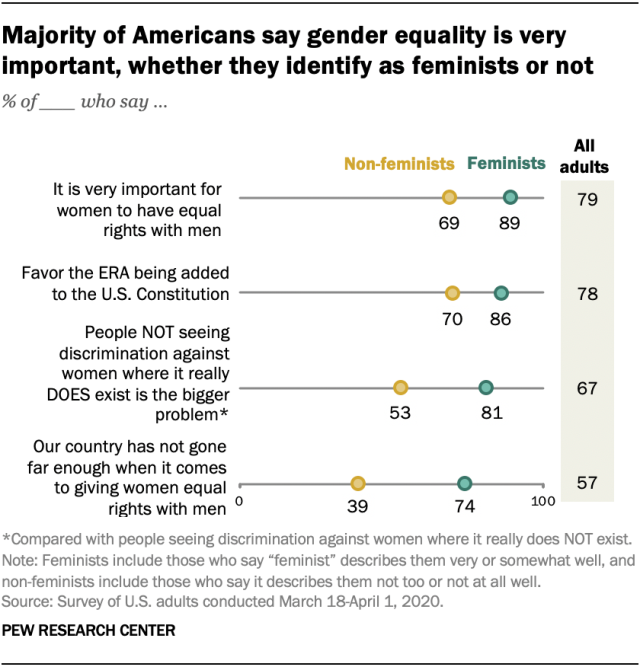 “The survey comes as scholars and commentators debate the impact of feminism on women’s rights and broader American culture,” stated Rachel Minkin, co-author of the study.

“Some argue that feminism has become universal and that the values and principles of women’s equality and empowerment have already been adopted to a large extent by society, no longer requiring identification with the label of feminist.”

In the findings, 89 percent of respondents stated that it is very important for women to have equal rights with men, while 69 percent of non-feminist respondents, or the vast majority, advocated such a notion.

When it comes to the addition of the ERA to the U.S. Constitution, many feminists, or 86 percent, advocate such action. A substantial amount of non-feminist respondents, or 70 percent, also agreed with such action.

“While the Center’s survey finds broad agreement on some aspects of gender equality, it also finds differences between self-identified feminists and non-feminists on other measures,” Minkin explained in the findings.

“To some extent, these differences can be explained by partisanship: Feminists are far more likely than non-feminists to identify with or lean toward the Democratic Party.”

“Overall, Democrats and those who lean Democratic are more likely than Republicans and Republican leaners to say gender equality is very important, and they are more than twice as likely to say the country has not gone far enough in giving women equal rights.”