According to the survey, initiated between June 16 to July 14, 2020, as much as 73 percent of American adults hold negative views of China, an increase of 26 percentage points over the last few years.

The survey also unveiled that nearly 64 percent of Americans believe China’s handling of the coronavirus pandemic was terrible, while 78 percent of respondents blamed China’s handling in Wuhan during the virus’ early stages for its massive global spread. 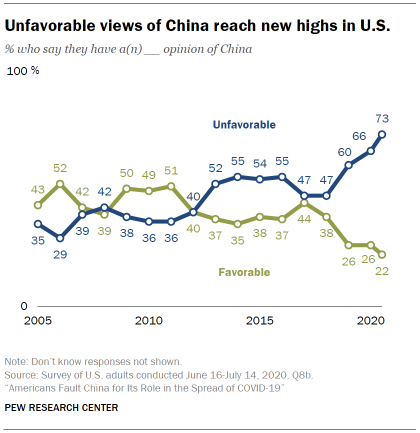 “Faith in President Xi Jinping to do the right thing in world affairs has also deteriorated: 77% have little or no confidence in him, up 6 percentage points since March and 27 points since last year,” the report states.

“More Americans also think the U.S. should hold China responsible for the role it played in the outbreak of the coronavirus (50%) than think this should be overlooked in order to maintain strong bilateral economic ties (38%). But, when asked about economic and trade policy toward China, Americans are slightly more likely to prefer pursuing a strong economic relationship (51%) to getting tough on China (46%). Still, more support getting tough on China now than said the same in 2019, when 35% held that view.”

Depressive traits might be more common among adults in the U.S.