Long before the emergence of the severe acute respiratory syndrome coronavirus 2 (SARS-CoV-2), which may have originated in Central China, researchers warned of a potential re-emergence. A re-emergence in horseshoe bats that could originate by either the cultural consumption of exotic mammals or in laboratory settings.

“The presence of a large reservoir of SARS-CoV-like viruses in horseshoe bats, together with the culture of eating exotic mammals in southern China, is a time bomb. The possibility of the re-emergence of SARS and other novel viruses from animals or laboratories and therefore the need for preparedness should not be ignored,” a peer-reviewed study published in Clinical Microbiology Reviews claimed.

In a recent study, published by Pew Research Center, about 25 percent of American respondents are in accordance with the conspiratorial belief that the re-emergence of the coronavirus was intentionally planned. 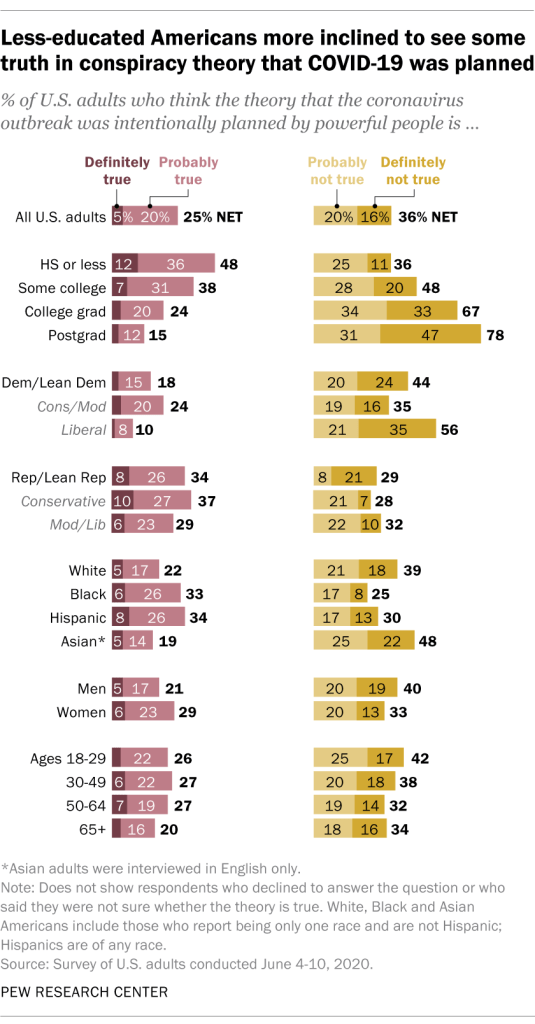 According to the findings, both educational attainment and partisan affiliation played a crucial role in determining how one perceives the conspiratorial belief.

Less-educated Americans were more likely to identify some truth in the conspiratorial belief of the recent coronavirus pandemic, the survey found.

“Around half of Americans with a high school diploma or less education (48%) say the theory is probably or definitely true, according to the survey, which was conducted as part of the Center’s American News Pathways project.”

Moreover, Black and Hispanic adults are at a higher likelihood of synchronizing with such beliefs, compared to white and Asian Americans. Women are also more likely than men to believe the pandemic was intentionally planned.

The survey did not take into account the origination of the conspiratorial belief among the participants, such as how and where the disinformation was consumed. The United States, China, and Iran have engaged in disinformation tactics since the start of the SARS-CoV-2 pandemic.

The World Health Organization’s Director-General declared an ‘infodemic’ in early-2020 as a result of the wealth of misinformation being peddled online.