As the recent coronavirus outbreak ravages the world order, foreign relations between leading nations and extreme acts of sovereignty continue to be impacted.

Russia’s current leader, who was previously slated to step down and respect the Constitution of the Russian Federation, is eyeing an extension as ruler but the act was recently affected by the coronavirus. Tensions at the World Health Organization, on the other hand, an international agency with committed cooperation between China and the U.S., has left both leading nations in a distrustful position.

Looking toward post-COVID-19, Americans theorize that the future will likely feature deteriorating relations between the U.S. and China, damaging further the communist nation’s standing on the world stage. According to a new survey, released by Pew Research Center, half of Americans believe China’s international standing could tank once the coronavirus outbreak completely subsides. This notion is most popular among Republican-leaning supporters compared to advocates of the left-leaning party.

“China’s response to the virus has been met with disapproval by many Americans, half of whom believe the country’s international reputation will take a hit as a result of the virus. About a third (31%) of Americans think China’s influence will remain the same, and roughly a fifth (17%) expect it will grow,” the Pew Research co-authors explained in their findings.

Moreover, in the survey, the majority of respondents depicted China as a less dominant nation and more as a major threat to the U.S. in power and influence.

“Americans’ perceptions of China’s military strength relative to other major military powers have also fallen. Just 6% of Americans now view China as the world’s top military power – down from 12% in 2016 – though three-in-ten still see China as the leading economic power,” the Pew Research findings state.

“Still, many Americans see Chinese power and influence as a major threat to the U.S. That share has climbed 14 percentage points since 2018.”

The Pew Research findings also implied that respondents stand by the notion that the European Union’s international standing will not be affected by the coronavirus outbreak. 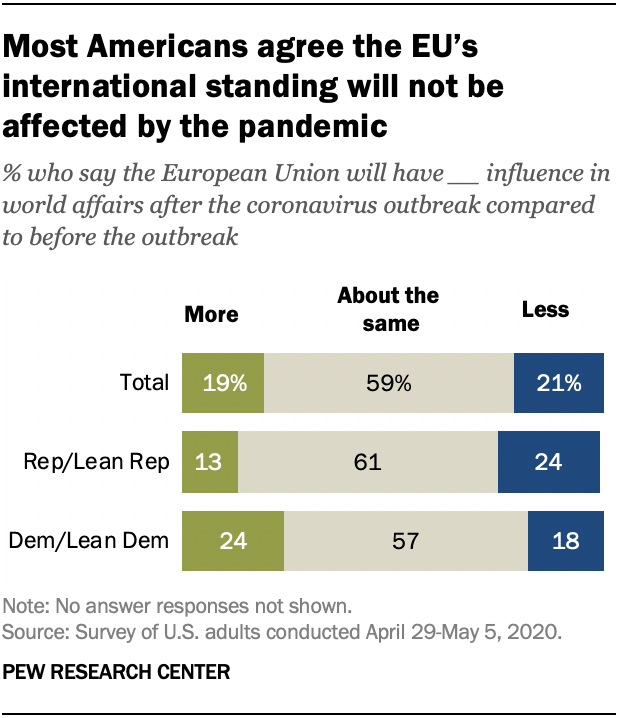