In the U.S., recent social demonstrations and clashes between political groups have led to criticism of the mainstream news media’s coverage of such events. In newsrooms across the country, journalists and editors were deeply divided on how the media coverage represented the general population’s ideals on key issues.

According to a survey from the nonpartisan think tank Pew Research Center, most Americans believe that news outlets misunderstand their viewpoints of racial demonstrations, but for different reasons varying by ethnic groups.

“While most Americans say that the news media do not understand them, black, Hispanic and white Americans often cite very different reasons for why they are misunderstood,” the Pew Research authors stated in their news release.

“Overall, 59% of Americans think news organizations do not understand people like them, while a minority – 37% – say they do feel understood. This feeling is about on par with the last time the question was asked in 2018.” 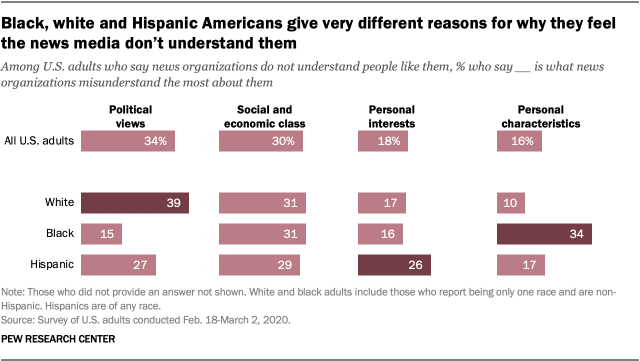 Among the ethnic groups, 61 percent of white Americans felt the news media misunderstands their coverage of racial demonstrations. 58 percent of black Americans and 55 percent of Hispanics exhibited similar views but cited different reasons.

“All three racial or ethnic groups are about on par in thinking that the news media misunderstand their social and economic class,” the findings state. “A similar question was posed to those who feel the news media do understand them, asking how they are most understood, and again, no single reason dominates.”