In a recent report by Pew Research Center, their team found that more Americans are showing confidence and trust in medical professionals, especially among Democrats, during the SARS-CoV-2 pandemic.

In the study, comprised of two surveys, conducted between April and May, the Pew Research team determined that 43 percent of adults in the U.S. expressed a substantial amount of trust in medical professionals, up from 35 percent before the pandemic.

Given the growing partisan clashes in the wake of the pandemic, the research team only found a considerable increase in public confidence among Democrats and not respondents leaning toward the Republican party. 53 percent of Democrats showed confidence in the medical community, while 31 percent who also did were Republican supporters.

Moreover, in the survey, the Pew Research team also concluded that a majority of Americans are in accordance with the social distancing measures implemented by government officials.


Based on their responses, 59 percent purported that the measures taken during the pandemic helped inhibit the possibility of coronavirus transmission; this assumption, however, was most prevalent among Democrats. 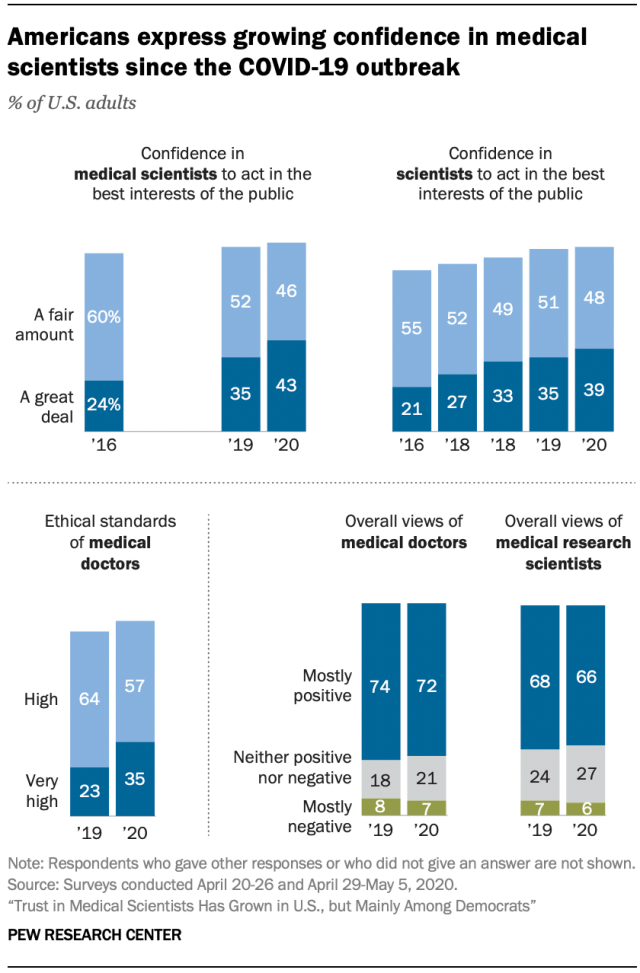 From Pew Research Center: “Americans’ confidence in medical scientists has grown since the coronavirus outbreak first began to upend life in the United States, as have perceptions that medical doctors hold very high ethical standards.”

“And in their own estimation, most U.S. adults think the outbreak raises the importance of scientific developments,” the report concluded.

Researchers detail the importance of protein shapes in neurodegenerative studies