With several months remaining until the start of the upcoming general election, many Americans speculate that the SARS-CoV-2 outbreak may interfere in some way with the voting process.

According to a recent report by the Pew Research Center, 67 percent, or two-thirds of Americans, believe that the pandemic is likely to cause significant interference with the voting process on November 3, 2020.

The nonpartisan think tank recruited 4,917 adult participants for their new survey. Voting by mail for the preferred candidate was deemed the most feasible option in light of the recent outbreak, according to respondents.

Overall, 70 percent support allowing any voter to vote by mail if they so choose, with 44 percent expressing strong support. 52 percent of the population favors conducting all elections by mail. Pew Research reports that support for this proposal has increased 18 percentage points since 2018.

While the majority of Americans anticipate that the coronavirus will have an impact on the presidential election, majorities are at least somewhat confident that it will be conducted fairly and accurately (59 percent) and that all eligible citizens will be able to cast ballots (63 percent).

In addition, the research team found that Democratic-leaning respondents were less confident than their Republican counterparts that all citizens expressing an interest in voting in November would be able to do so. 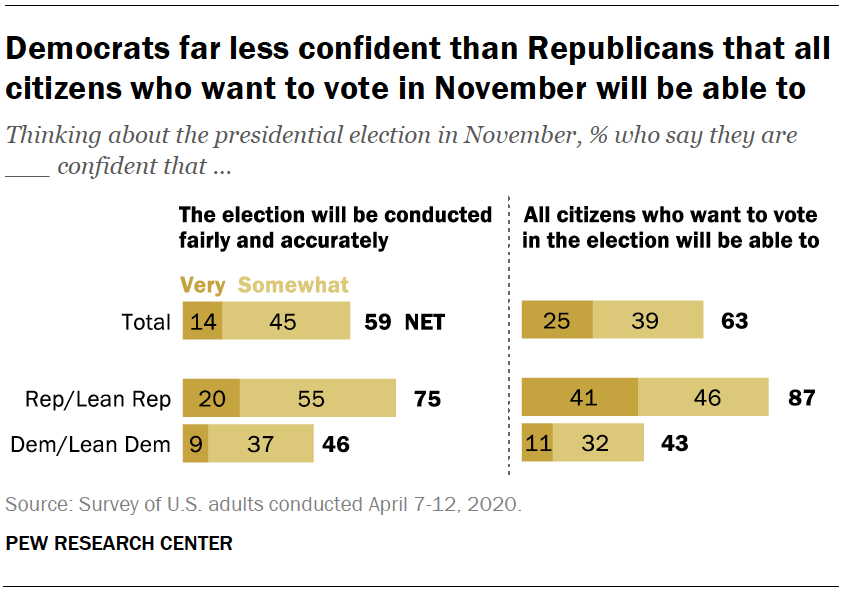 The majority of respondents also agreed that, regardless of who occupies 1600 Pennsylvania Avenue in early 2021, the losing candidate must publicly acknowledge the victor of the 2020 election as legitimate.