Amid a growing demand to fulfill higher-skill occupations, new research shows women are making the most significant surges in wage growth among such roles, which mandate social, fundamental, analytical, and managerial skills. The study was released by Pew Research Center.

“The increase in wages for women has been sharper in jobs calling for greater prowess in skills,” the findings say. “Not only have women been entering the labor force in greater numbers than men since 1980, they have made their presence felt more strongly in jobs with the greatest reliance on these types of skills.”

In the study, researchers analyzed data from the Occupational Information Network (O*NET). They found an increase of 58% from 1980 to 2018 for occupations requiring analytical skills. For some particular skills, women are more superior than men, including those that require higher educational attainment.

“They are more likely to hold jobs in which fundamental and social skills are more important, and a greater share of women than men have graduated from college,” the study showed.


According to the findings, social and fundamental skills are considered the most crucial skills, with increased fulfillment of such demanding occupations at an all-time high. 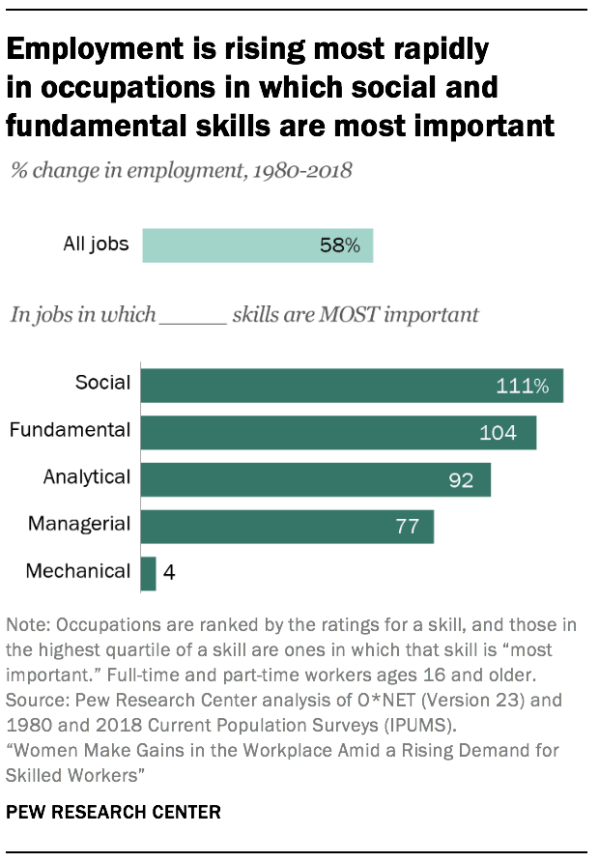 In occupations requiring skills of less significance, like mechanical skills, as the findings indicated, demand is on the decrease. “On the other hand, wages vary little across jobs based on their reliance on mechanical skills.”