Among Americans, there’s been a steep surge of partisan antipathy over the last few years, with an even larger rise expected as we approach the next election in 2020.

In a recent study, partisan antipathy was evident through a sample associated with the American Trends Panel created by Pew Research Center. In the online-based study, researchers recruited 9,895 participants and measured antipathy toward their counterpart on opposing sides of the political spectrum.

The participants were invited to share their objectifying views on traits and characteristics describing their opposing party. The survey was conducted between September 3-15.

Based on the findings, respondents expressed antipathy toward their opposing party, with some negative sentiments worsening since the previous election cycle.

As referenced in the findings, more than half of Republicans portrayed their counterparts, Democrats, as immoral. Less than half of Democratic respondents allocated similar views about Republicans.

“As prior surveys on partisan polarization have shown, partisans who are highly attentive to politics are most likely to express negative sentiments about the opposing party,” the report says.

“Even as Republicans and Democrats have grown more critical of each other, they acknowledge – and voice concern about – the partisanship dividing the nation.”

“Overwhelming majorities in both parties (85% of Republicans and 78% of Democrats) say divisions between the two parties are increasing. Similar shares express concern about the partisan divide, with about half in each party saying they are very concerned about this.” 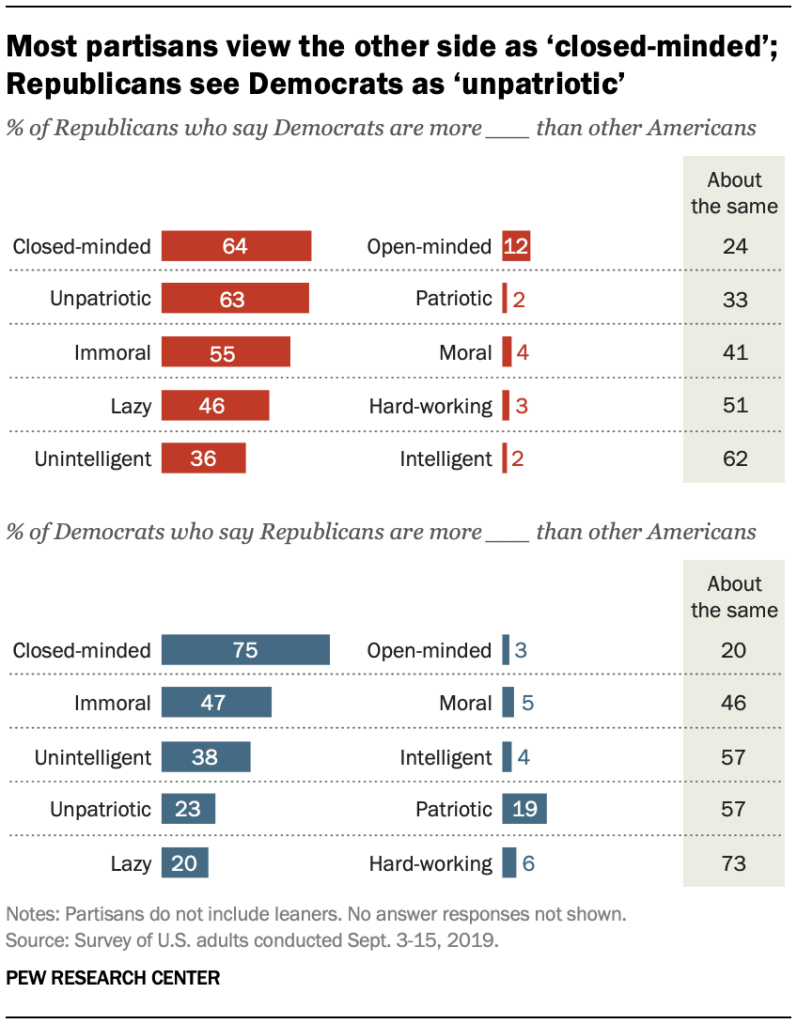 The new findings provide more weight to the notion that many Americans portray both political parties as too extreme; a build-up of sentiments that began during the past election cycle.

“More Americans say the Democratic Party than Republican Party is described well by such phrases as is respectful and tolerant of different types of people, cares about the middle class and governs in an honest and ethical way,” the report adds. “But nearly identical majorities say each party is described at least somewhat well by the phrase is too extreme in its positions.”

Ketamine might be an efficient treatment option for alcohol use disorder