Over the last several years, the use of social media as a platform for political engagement and activism has become synonymous with Black Americans, who’ve amplified the awareness of racial disparities.

As part of a recent survey by the Pew Research Center, Black Americans are continuing to see social media platforms as a dominant way of becoming involved with social issues, like community-level racial prejudice.

According to the survey, social media sites have been detrimental in the organizing and implementation of various wide-scale protests over the course of numerous landmark tragedies, invoking civil unrest.

Depending on the age and behavioral conformity, some Black social media users may very well use the platform to spread politically-based activism, drawing the support of other users with like-minded reasonings.

“The types of online activism engaged in by Black social media users varies by age, with younger Black users being more likely to do these things than older Black users,” a Pew report states.

“But overall, 48% of Black social media users said they posted a picture to show their support for a cause on social media in the month prior to the survey fielded June 16-22, 2020, while a similar share said the same about encouraging others to take action on issues that are important to them or looking for information about rallies or protests happening in their area.” 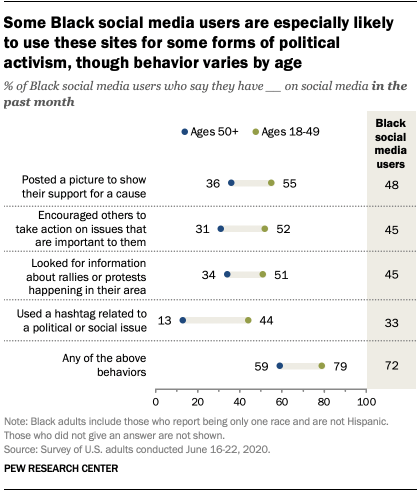 Among the social media users of color, who’ve extensively used such platforms for engaging in activism, uploading images as a show of support and recruiting other activists have been the two most prevalent factors of their online usage.

Black social media users were also more likely than Hispanic or White users to engage in a show of activism to fuel political discourse. 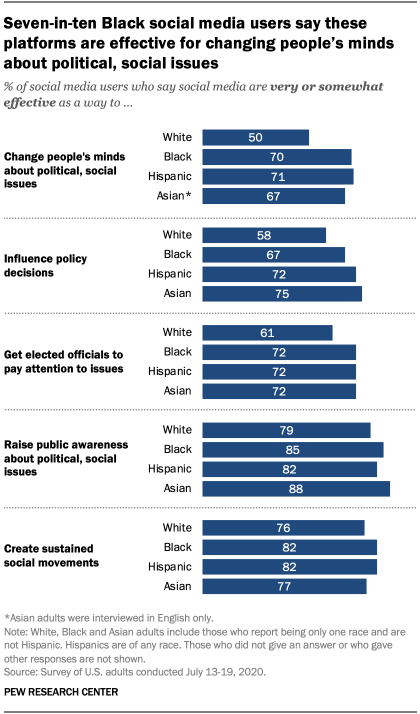 “Across some of these activities, Black Americans who use social media were more likely to have engaged in these activism-related behaviors on these sites in the past month when compared with those from other racial or ethnic backgrounds,” the Pew report also details.

Moreover, social media users of color were considerably more likely to perceive such platforms as a means of changing people’s minds about social issues. Hispanic and Asian users lead, however, when it comes to bringing to light certain key issues affecting policy-making decisions.

“These views generally hold true when influencing policy decisions and getting elected officials to pay attention to issues are considered. As to whether social media are seen as very or somewhat effective for creating sustained social movements, Black and Hispanic users (82% for both) are more likely to say this than White Americans (76%) who use these sites,” the report concluded.