Russia’s most prolific leader since the fall of the Soviet Union, Vladimir Putin, has been the subject of both praise and repugnant remarks on the world stage. Over the years, the Russian leader has managed to destabilize Western relations, particularly aimed at combating the perceived threat of NATO.

In a new survey, released by the Pew Research Center, Russia’s stance on the world stage is purported to have declined in recent years.

According to the Pew data, the Russian Federation, although not considered an enemy to the United States or its many allies, has received unfavorable evaluations in countries such as the U.S., Canada, much of Europe, and East Asia.

The survey, conducted in the Summer of 2020, the Pew authors claimed, states that Sweden and Denmark are purportedly the nations that expressed the most negative views toward the Russian leader.

“A median of 66% of adults in those countries express an unfavorable view of Russia, with majorities in 12 of the 14 countries holding that view. Only a median of 29% hold a positive opinion of Russia,” the Pew data states.

“People in Sweden, Denmark and the Netherlands hold the most negative views of Russia. At least three-quarters in all those countries hold an unfavorable opinion. Two-thirds or more say the same in Spain, the United Kingdom, Japan and the United States,” it continued.

Moreover, the authors of the survey delved into the support Russians have among right-wing populists residing in Europe. While a considerably high number of respondents expressed negative views, support for the Russian leader remained significant. 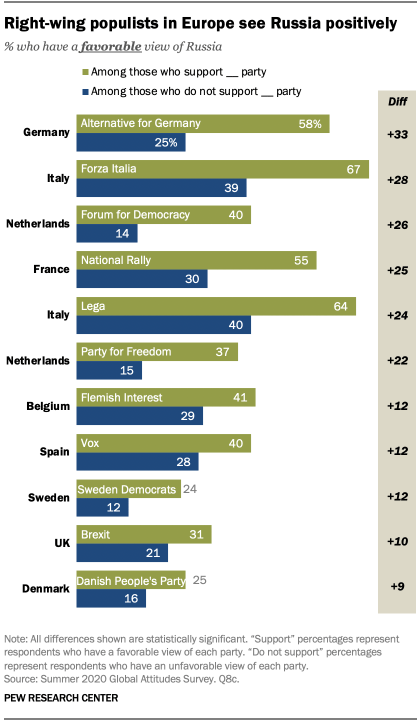 In 2018, the Russian leader was slated to step down, as per the constitution. In 2020, however, the entire Russian government resigned as Putin announced plans to stay in power and a guarantee of immunity from prosecution throughout the rest of his lifespan.

A US-based think tank report by high-ranking military officials has suggested that Putin may suffer from autism.